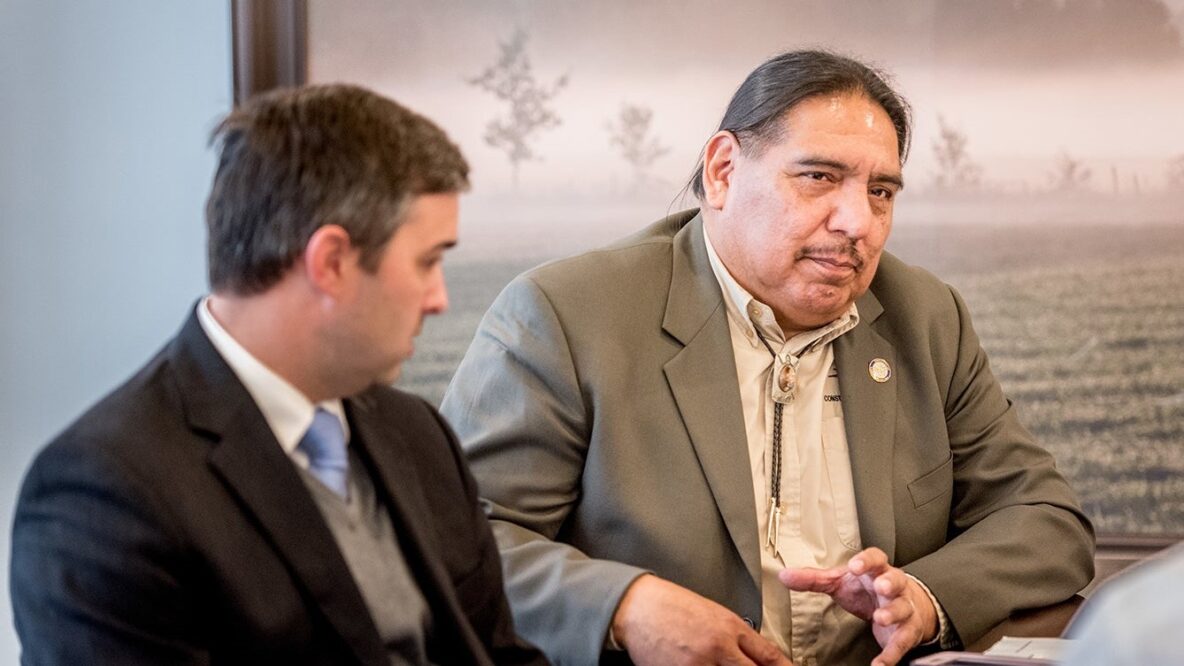 This article was originally published by The Hill.

Members of the Seneca Nation of Indians and others from the surrounding western New York community gathered together in mourning.

They rang a bell and lit lanterns, symbols of loved ones affected by the opioid epidemic. The bell tolled dozens of times, honoring the dead.

Lanterns flew up into the evening sky.

American Indians are among those the opioid epidemic has hit the hardest, though scant attention has been paid to how the crisis is ripping through their communities.

At least 20 tribes have formally sued opioid manufacturers and distributors, with at least 10 more suits under contract and expected to be filed soon. They’re joining a long list of hundreds of cities, counties and other health care stakeholders who have sued, an effort to recoup money spent fighting the opioid epidemic and force new reforms aimed at turning the tide of the crisis.

“Native Americans are a forgotten people when it comes to this crisis,” said Jeff Gaddy, an attorney at Levin Papantonio who has been working to file opioid lawsuits, including for the Seneca Nation of Indians. “The Senecas, as well as other tribes across the country, are refusing to accept that and filing lawsuits to hold big pharma accountable for the harms that they’ve caused.”

Among the allegations, the lawsuits claim that companies were aggressively marketing opioids while downplaying the risk of addiction, and shipping suspiciously large volumes of painkillers without alerting authorities.

The hundreds of lawsuits have been consolidated in Cleveland in the hopes of saving time and money and ensuring pre-trial rulings are consistent. Judge Dan Polster oversees them all, in what’s known as a multidistrict litigation.

To some, it was imperative the tribes join the litigation — and early.

Tom Rodgers, a voting rights advocate and lobbyist who blew the whistle on the Jack Abramoff lobbying scandal, is working to ensure Native Americans have a seat at the negotiating table. He “could not have history repeat itself,” Rodgers wrote in an email, referencing what he refers to as tribes’ exclusion from the major tobacco settlements of the 1990s.

State attorneys general sued tobacco companies in the 1990s, in part to recover money the states were spending due to the toll tobacco was taking on people’s health.

About 20 tribes filed a lawsuit against the tobacco industry in 1999, alleging they were unfairly excluded from the hefty master settlement with 46 states and territories, and sought more than $1 billion in damages.

None of those tribes had attempted to participate in the states’ and the tobacco companies’ settlement negotiations, according to court records. In 2001, a court of appeals dismissed the case as not having standing to challenge the agreement.

Mike Moore, the Mississippi attorney general at the time, filed the first state lawsuit against cigarette manufacturers and his case was settled before the master settlement. He pushed back on the notion that tribes, along with cities and counties, were unfairly excluded from the settlements in general: The tribes and local governments didn’t receive settlement funds because the states were seeking to recoup money they were spending on government services, such as Medicaid, Moore said, and the tribes didn’t pursue litigation.

The opioid lawsuits have often been compared with the major tobacco settlements, since both aim to solve a large-scale public health problem. Yet, the opioid epidemic is exceedingly complex.

With tobacco, there weren’t needles laying in the streets, or a vast need to increase the number of addiction clinics across the country, or an illicit drug market, like that of heroin, said Mike Fuller, a partner at McHugh Fuller.

“That’s why the opioid issue is so much bigger, and it’s so important that we be mindful of that in the litigation and make sure that what we’re doing is focused on addressing the problem and cleaning up our communities,” he said.

In referencing the opioid epidemic and Native Americans, Rodgers “witnessed how incredibly broken the governmental response was when it came to the necessary financial resources to heal our people in order to deal with this incredibly immoral, unethical and perhaps illegal behavior by so many,” he said. “Given this brokenness, I knew the only way to truly obtain justice was to seek to tell our story before a judge or jury.”

Roughly a year ago, Rodgers and a consortium of six law firms began having conversations with tribes about suing manufacturers and distributors, according to Rodgers. The group represents several hundred governmental plaintiffs.

The consortium — along with the Skikos firm that recently began working with Rodgers — has already filed lawsuits for three tribes, with another 10 coming soon, according to Rodgers. The tribes span areas across the U.S., from New York to California and North Dakota to Oklahoma.

“At the end of the day, I absolutely believe that it’s important for the tribes to be heard, be recognized and be compensated just like the rest,” said Fuller, who is also working with tribes and whose firm is part of the consortium.

With its wide array of plaintiffs, the opioid litigation already looks markedly different than the tobacco settlements. And if the effort does produce a settlement, then “it needs to be a global one,” Polster, the judge, said in an interview.

“I would envision that if there is a settlement, the tribes that have filed cases would be part of that settlement, and obviously they are part of any discussions going on as a result,” he told The Hill.

The lawsuits tend to focus on manufacturers and the three big distributors — AmerisourceBergen, Cardinal Health and McKesson.

In a statement, AmerisourceBergen said it has reported and halted thousands of suspicious-seeming orders and refused service to customers at risk of diversion, in addition to providing the Drug Enforcement Administration with daily reports.

McKesson echoed similar sentiments, stating that it is committing $100 million to a foundation it recently launched to combat the opioid crisis.

Cardinal Health directed The Hill to the distributors trade association. “Given our role, the idea that distributors are responsible for the number of opioid prescriptions written defies common sense and lacks understanding of how the pharmaceutical supply chain actually works and is regulated,” John Parker, a senior vice president of the Healthcare Distribution Alliance, said in a statement. “Those bringing lawsuits would be better served addressing the root causes, rather than trying to redirect blame through litigation.”

Several manufacturers named in lawsuits, such as Purdue Pharma and Janssen Pharmaceuticals, said they’re committed to helping solve the crisis. In a statement, Purdue Pharma described actions the company has taken, such as developing medications with abuse-deterrent properties.

Janssen Pharmaceuticals pushed back on the allegations, arguing, “Our actions in the marketing and promotion of these medicines were appropriate and responsible. The labels for our prescription opioid pain medicines provide information about their risks and benefits, and the allegations made against our company are baseless and unsubstantiated.”

An estimated 115 people die per day of an overdose involving an opioid. The judge from Ohio, a state facing one of the worst opioid crises, has made clear he wants to do more than “just moving money around.”

“My objective is to do something meaningful to abate this crisis and to do it in 2018,” Polster said at the outset of the case’s first hearing in early January.

He expressed confidence that the litigation “can do something to dramatically reduce the number of opioids that are being disseminated, manufactured and distributed” and also “get some amount of money to the government agencies for treatment.”

Communities across the country have been grappling with how to increase the availability of treatment for opioid addiction, and tribes are no different. They, like the rest of the nation, are struggling with a shortage of behavioral health providers, said Dr. Joel Beckstead, the acting director of the Division of Behavioral Health at the Indian Health Service.

In Wyoming, a recovery center servicing the Northern Arapaho Tribe and tribal members in the surrounding community wishes it had resources to help people the moment they decide to seek treatment. But there aren’t enough certified providers to see clients, or enough rooms to see them in, or enough funding to launch more programs at the White Buffalo Recovery Center.

An estimated eight to 10 people are on the waitlist for intensive outpatient treatment, a program capped at 30 people per day, according to Sunny Goggles, the director of the White Buffalo Recovery Center.

The Northern Arapaho Tribe has filed a lawsuit against opioid manufacturers and distributors, and if settlement money comes, Goggles hopes that could help fill some of the funding gaps, and also bolster prevention efforts.

Opioids contributed to the deaths of several hundred Native Americans in 2016 — a crisis that has shaken their communities. It’s one that has a root in generational trauma extending back many years, Beckstead, of the Indian Health Service, said.

Grappling with the effects of trauma, such as a history of ancestors who were removed from their land, “it creates in the current generation sometimes a tendency to turn to things like opioids to try and cope with those kinds of things,” Beckstead said.

In 2016, American Indians and Alaska Natives had the second highest rate of opioid overdose deaths of any race — an estimated 14 fatalities per 100,000 people. The death rate among white people is 17.5 per 100,000; 10.3 for black Americans; 6.1 for Hispanics and 1.5 for Asians and Pacific Islanders, according to the most recent data from the Centers for Disease Control and Prevention (CDC).

But the numbers don’t tell the full story. For Native Americans, the underreporting is far greater than that of other groups, perhaps as high as 30 percent, according to Robert Anderson, the CDC’s chief for its mortality statistics branch.

The crisis has taken a toll on communities, such as where Gates, the president of the Seneca Nation of Indians, lives. He’s seen the impact of the opioid epidemic firsthand, as the leader of a tribe of more than 8,000 people. He knows what it’s like to lose loved ones to the crisis.

To him, the Seneca’s lawsuit is about getting the money needed to fund prevention and treatment. Also, it’s about trying to stop the deaths.